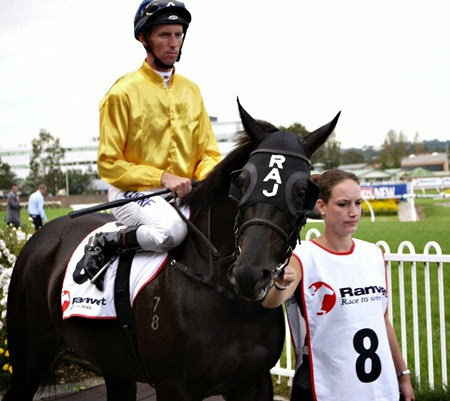 Silent Achiever – can she make it four Group One wins in a row?

Easter can be boring, in fact I’ve always thought Good Friday has to be the most boring day of the year unless of course if you are religiously inclined.  The only bright note of Good Friday is the consumption of Hot Cross Buns, but these days you seem to be able to get them year round, so they’re not so special anymore.  I make a point of only eating them on Good Friday. As I’m not a chocoholic I don’t care much for Easter Sunday and don’t buy, or even expect to receive, Easter Eggs.

So thank the lord for first class horse racing in an otherwise tedious Easter break.

It’s all happening at Randwick in Sydney, it being the second weekend of  The Championships, a new fangled appellation for the final meetings of the Sydney Autumn Carnival. Four fantastic Group One races are on the program, including the newly richest 2000 metre race in the world, that being the Queen Elizabeth Stakes.

The first of the Group One races is the Queen of the Turf  Stakes, run over 1600 metres. Can Catkins finally win a well deserved Group One race? If the track is slow, as it is most likely to be, she has a very good chance of doing so. However, she faces a really tough field that includes her very classy stable mate Red Tracer, who though being quite disappointing so far this autumn in harder races, at her best would be winner. Others in contention are Streama, excellent on her day,and  three year old class fillies  Bonaria, Gypsy Diamond  and Solicit, who have a weight advantage.

Fillies come to the fore in the second of the Group One races, the Australian Oaks, run over 2400 metres. Top pick is Lucia Valentina who took out the Group One Vinery Stud Stakes at her last start.  Others with a chance are Rising Romance, Miss Mossman, Zanbagh and Forever Loved, who all ran in the Vinery and could turn the tables on the winner in this race, being as it is 400 metres longer.

The Sydney Cup is one of the few 3200 metre races on the Australian racing calendar. It’s not as big an event as the hallowed Melbourne Cup, but it does give tried and true stayers a chance to show off their stamina. It has drawn a a field of 17 acceptances, with several likely chances, chief of which is the Auckland Cup winner Who Shot TheBarman, Irish bred  The Offer who won lead up races, the Manion Stakes and the Chairman’s Handicap. I rather fancy Irish mare Voleuse de Coeurs, who has twice won over 3200 metres and hasn’t been too far away in her last two runs in Australia. Others with a look in are Opinion, Hippopus and Tremec who all ran places in their lead up races.

Now the richest middle distance race in the world, the Group One Queen Elizabeth Stakes rewards the winner with a cool $2,400,000. An exceptional field has been assembled to contend for these riches, and include Ranvet Stakes/ BMW winner Silent Achiever, It’s A Dundeel, Carlton House aiming to win his owner the race named in her honour, the Doncaster winner and runner up Sacred Falls, and Royal Descent, Epsom/ Emirates winner Boban, and 2012 Melbourne Cup winner Green Moon. Alas Fiorente is not part of the field, as he sustained a tendon injury in the BMW and has been retired to stud.

So who will win?

Surely It’s A Dundeel is due for a win! He has not been beaten by all that much in his three runs this autumn, and he is a class act, so with luck on his side he could show the brilliance that won him the 2013 ATC Derby. Silent Achiever is his greatest threat. She is absolutely flying this autumn and is currently, with four wins under her belt, on a winning streak, and aiming for a fifth.  Carlton House would have won the Ranvet Stakes had he not been pipped at the post by Silent Achiever. He certainly set the pace in that race and will take running down in the QE Stakes should the same tactics be employed.  And how can you ignore Boban? He’s too good to leave out, though he hasn’t won over 2000 metres, the mile (1600 metres) being his pet distance. Perhaps Chris Waller will win the trifecta again as he did last week in the Doncaster with almost half the field being from his stable, including Sacred Falls, Royal Descent and Hawkspur who all have a chance, especially on a heavy track.

The support card is excellent with two Group Two and one Group Three races being run as well, but I’m not going to preview them in this post.

Anyway, hopefully the track will not be as heavy as the last two meetings have been. The weather in Sydney has improved over the last few days, so the track may get a chance to dry out and even be rated as dead by the mid afternoon on Saturday.

Whatever, I’ll be watching with keen interest. There’s bugger all else to do on Easter Saturday.

It’s A Dundeel won the Queen Elizabeth Stakes this afternoon, overtaking Carlton House in the straight ,who had led the race from the start at a good fast rate. Dundeel raced in third spot and was in a prime position to take command when they turned into the straight, and take command he did, very quickly overtaking the Queen’s horse, then holding off a late charge by Sacred Falls to win by almost a length.  Carlton House hung on for third, with the brave Silent Achiever running a close fourth.

There was scare earlier in the afternoon, when it was reported that It’s A Dundeel slipped in his stall and had fallen. After a veterinary check  he was passed fit to race. He only nicked his hindquarters in the incident reportedly, and he certainly put pay to any injury queries with his win in the QE Stakes.

The other Group One races results:

Australian Oaks – New Zealand filly Rising Romance won from Zanbagh with hot favourite Lucia Valentina, storming home from the back of the field to finish in third spot.

Sydney Cup – The Offer won Gai Waterhouse her second Group One race of the afternoon (the other was Diamond Drille) and the Chris Waller trained Opinion ran second. Sertorius was third.

Young jockeys Tommy Berry and James McDonald shared the Group One spoils each riding two of the four winners.

All up it was a great day of racing, and the track which was classified as Slow 7, in the early afternoon, ended up Dead 5 in the end.

Having followed It’s A Dundeel for a couple of years now, I’m really pleased that he has restored his reputation and shown his undoubted brilliance once more.