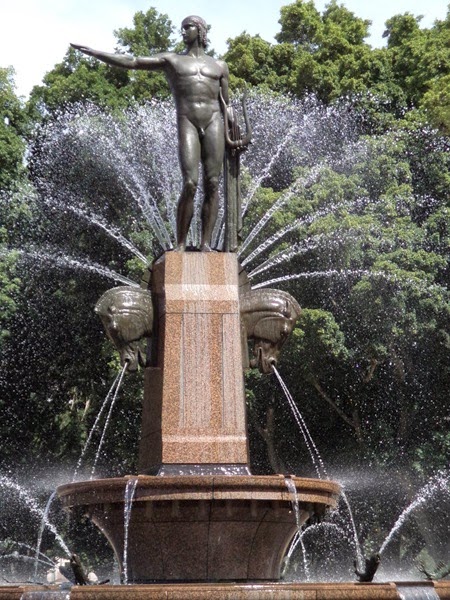 So, I suppose you are keenly awaiting my impressions of the Astro New Year Dinner…

The trip back to Sydney Central from Rosehill took much longer than I expected, so I was late getting to the Astro Dinner venue in Alexandria. Fortunately it was not far from the city centre and a short train trip followed by a brisk walk got me there at 7.00pm, only half an hour late.

Everyone was in the process of eating the entree as I joined the Fire table. Yes, the guests were seated according to the elemental attributes of their signs, which in Astrology assigns three signs each in fire, earth, air and water.   Being a Leo I was pleased to be at the fire table which as you can imagine was buzzing and vibrant.  My fellow fire signs were all very friendly and, you guessed it, the main topic of conversation was astrology.  The other elemental tables appeared to be just as lively, and indeed there was a lot of mingling between them.

It was a great pleasure to meet the amazing Mystic Medusa in person for the first time. She was reassuringly ordinary and a thoroughly pleasant and friendly person. I suppose I was expecting someone more exotic, as others admitted as well. 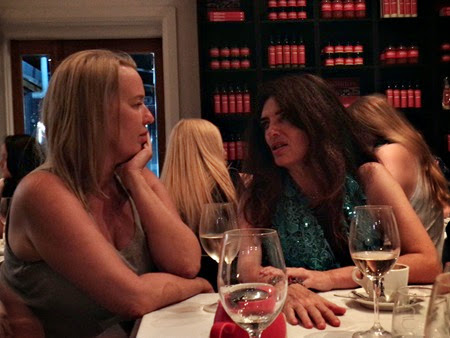 Mystic (left) chats with a guest at the fire table.

The restaurant was very noisy, and my hearing is not as it was in my youth (too many rock concerts) so I completely missed the Mystic rant on the fire table, sitting as I was on the opposite end of the table.

The food was very tasty, though if you got me to describe what we ate, I couldn’t tell you. Neither could anyone else. I assumed it was some kind of vegan fare, but I could be wrong. The restaurant specialises in French/Australian gourmet food. However the wine flowed freely so everyone was very much in party mode and I met lots of lovely ladies whose names I have unfortunately forgotten, though not their faces or personalities.

Most of the Astro Dinner guests were female, with only a few men present. but that was understandable as most of the comments on Mystic’s blog are written by women, and blokes don’t seem to have the the same interest in subject. Even so, most of the great astrologers of the past were men – Nostradamus, Charles C E O Carter, Alan Leo, to name a few.

It was an exhilarating evening that I enjoyed enormously. Crazy in a totally amusing and unusual way, it was worth the trip to Sydney.  Quite a few of the other guests had flown from interstate as well, so I was not the only one to succumb to a whim and the chance to meet the awesome Mystic Medusa.

It was around 11.30pm that the last of the diners left, me included. I made my way back to the city by train still buzzing from the energy of the dinner party.

On Sunday I took it easy, or at least attempted to, but I found myself pounding the pavement once more searching in vain for the NSW National Gallery. I took a train to St James Station which appeared on the map to be the closest station to the Gallery, but I got distracted when I emerged by the Hyde Park Barracks. 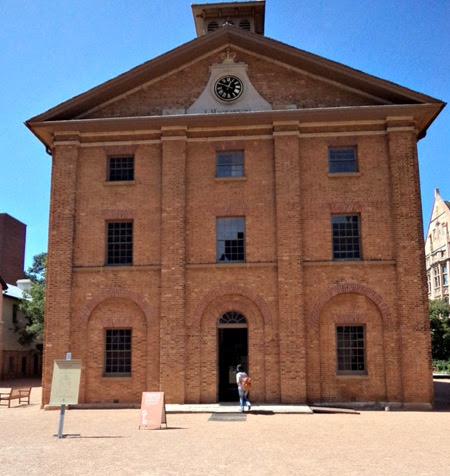 This building was designed by the convict architect Francis Greenaway and constructed between 1818 and 1819, designed to house convict men and boys. It is now a museum devoted to displaying relics of the era, and depicting the lives of those who dwelt there.

As it was only $5.00 to enter, I decided to view the exhibits housed over the three floors of the building. It was quite interesting, bringing back memories of my study of Australian History at University.  I breezed through rather cursorily, I must admit, as I found it hard to concentrate on any one thing for long, my afternoon’s goal being to make it to the Art Gallery. 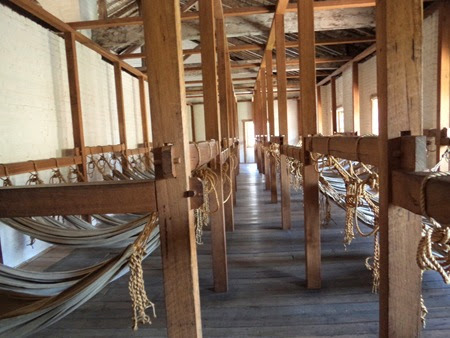 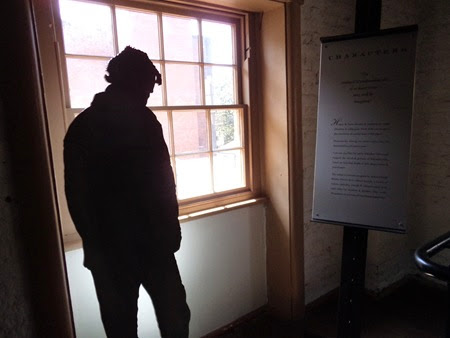 Irish Famine Memorial in the grounds of the Hyde Park Barracks

By rights, after leaving the Hyde Park Barracks, I should have headed in a northerly direction, but I was distracted by the Hyde Park Gardens, thinking they would eventually lead to the Botanical Gardens.

The Archibald Fountain is very fine and the cool shade of the park drew me further in. 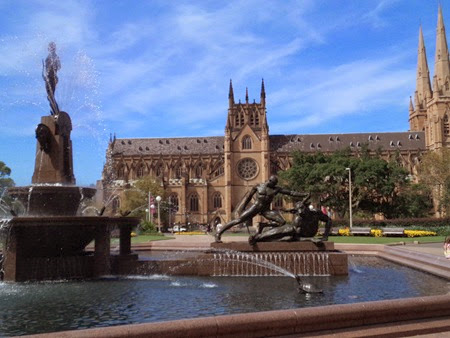 To cut it short I wandered around for ages and finally ended up back in the city centre, whereupon, giving up on ever finding the Gallery and foot weary, I caught a train to Circular Quay, planning to at least get photos of Sydney’s iconic structures and some water views.

Circular Quay is a spectacular station, situated as it is by the ferry terminal, and as you leave the station there is a great view of the harbour, with the Sydney Harbour Bridge on one side and the Opera House on the other. 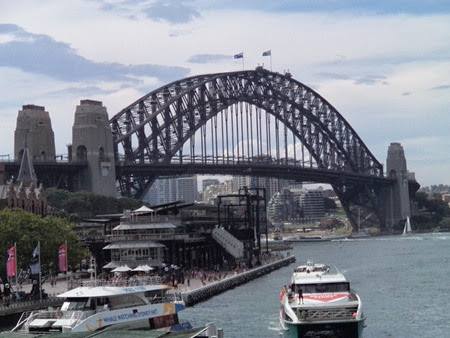 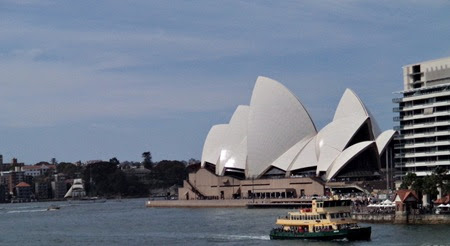 It is a lively spot Circular Quay, a hive of activity with plenty of people taking the air on a fine and sunny afternoon. I found a bar and, sipping a refreshing ale, sat and watched the parade, then got talking to some people who shared my table, who were a guy with an amazing Mohawk hairdo and his girlfriend.  I was really surprised that Mohawk was able to quote the following rhyme about ravens or magpies, which is somewhat esoteric knowledge: One for sorrow, two for joy, three for a girl, four for a boy, five for silver, six for gold, seven for a secret that’s never been told. It’s not a rhyme you hear quoted every day.

Eventually I made it back to my hotel, and had an early night as I was dead tired.

The weather in Sydney over the weekend was fine and sunny, though humid, but Monday afternoon it turned nasty. My plane was due to leave at 1.00pm, but was delayed for an hour by a thunder storm, where the plane, with passengers aboard, sat on the tarmac until it was clear to take off. Lightning flashed and thunder rolled, but finally the plane took off and I arrived back in Melbourne about 4.00pm and home an hour later.

It was a good break from my usual routine and I’m glad I went to the Astro Dinner and the Rosehill races. I should do it again sometime.

The Exercise Ground as it was known in 1810 was chosen as the site for the first official race meeting and the course was cut in an clockwise direction from the current vicinity of St James Station. There was no particular reason why they went clockwise but it set a precedent that Sydney has followed ever since.

It was unhallowed ground because the park was all unfenced in those early days and ground was criss-crossed with cart tracks. Obed West in his memoir of early Sydney remembers the Hyde Park track and notes that where the cart tracks crossed was where they buried suicides - with a stake through their hearts, as was the custom . It was the racecourse at the cross roads.

No I didn't know that. Perhaps I was unconsciously drawn to the Barracks and its surrounds because of its connectioins to racing history, but I don't think I'm that psychic. Thanks anyway for enlightening me to the significance of the location.

It goes to show how deeply horse racing is embedded in the history of Australia that the Hyde Park Barracks weren't built when the they first raced at Hyde Park.

What was built was Elizabeth Cottage, which I believe is the oldest building in Australia which is only a furlong from the gates of Rosehill racecourse - so you were walking some history last weekend. The cottage was the original residence of John and Elizabeth Macarthur.

John wasn't at the Hyde Park races. Macquarie landed with a warrant for Macarthur's arrest for his part in the Rum Rebellion but Macarthur had already left for England to attempt to talk his way out of it.

Neighbouring Elizabeth Cottage is Experimental Farm which is built on the site of James Ruse's allotment. He was the first convict to get a land grant. Rosehill is on James Ruse Drive. I have always had a theory that 'Rosehill' is actually a derivation of Ruse Hill - although technically the racecourse is on Macarthur's paddock.

BTW, do you mind if I borrow the picture of Todman's statue ? I know a plce where it will fit just nicely :)

I am very ignorant where the history of Australian racing is concerned, so your comments are enlightening and interesting. I agree with you that Rosehill could be a corruption of Ruse Hill.

You're welcome to the Todman statue photo. If you click on it a larger version opens in a separate window.

Adventures like that - little ones - are special I think and give you far more than there short time suggests they will. I did laugh at your missing the Gallery but some of those Sydney institutions seem tucked away, behind corners, across paths.

Your astro dinner sounds amazing. I'd be completely out of my depth having no real interest in the subject. The male-female issue is fascinating. How often does that happen i.e. that the main names are male but the main aficionados are female?

(BTW I'm sorry to be picky, but did you really mean "enervating"?)

Mrs Gums, Thanks for pointing out my misuse of "enervating". For some reason in my mind it comes across as the opposite of its real meaning. I've changed it to exhilarating.