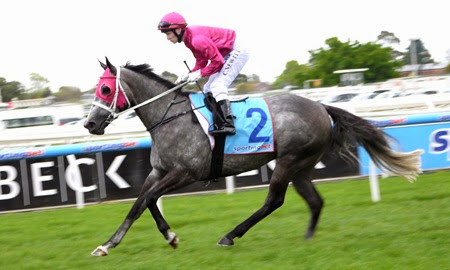 Catkins – can she win her first Group 1 race this Saturday?

There are three Group 1 races this weekend, the William Reid Stakes at Moonee Valley on Friday night, and the Coolmore Classic and Ranvet Stakes at Rosehill in Sydney on Saturday.

Last year’s William Reid Stakes starred Black Caviar who romped home for her 24th win before a huge crowd. I was there at that meeting and it was magic. This year however I won’t be present for the 2014 edition. It has attracted quite a good field, with the top contenders being Samaready,  Shamexpress and Spirit of Boom.

Samaready has been disappointing so far this season, but she gets her chance to redeem her reputation in the William Reid Stakes. She likes Moonee Valley, her last win was at the track in the Group 1  A J Moir Stakes in September last year.

Shamexpress prefers the big Flemington straight, and has performed well against  top sprinters like Snitzerland, and Buffering recently running second in the Black Caviar Lightning. Spirit of Boom is a reliable old sprinter, sure to be in the finish if not win.

Caulfield Cup winner Fawkner has also been entered in this race. He contested it last year first up after break, and ran third to Black Caviar, so could run a place this year as well.

I’m looking forward to visiting Rosehill racetrack for the first time, on Saturday, and the Australian Turf Club has certainly scheduled an excellent race card for the occasion.

Fiorente and It’s A Dundeel will be contesting the Group 1 Ranvet Stakes, so that’s a must see race. Run over 2000 metres, it will certainly sort out the top middle distance horse of the year. I’m awfully torn as to who to back. I’d love It’s A Dundeel to win, but I also wouldn’t mind if the handsome Fiorente continued on his winning ways.  It’s A Dundeel may have the advantage as his best wins have been in Sydney, whereas Fiorente has only had one start in Sydney at Randwick where he ran third behind All Too Hard in the All Aged Stakes last autumn. Others in contention are Foreteller, who won the Ranvet Stakes last year, and the Queen’s horse Carlton House who has apparently finally acclimatised to Australian conditions, being very competitive in the Parramatta Cup recently, running second to outsider Opinion. Fresh from two recent wins in New Zealand, the consistent Silent Achiever may pip the lot of them; ignore her at your peril.

The bonny grey mare Catkins gets her best chance to win her first Group 1 race in the Coolmore Classic. She has been going great guns since resuming, winning both of her starts. The only horse who has beaten her in her last four runs was stable mate Red Tracer who is not part of the Coolmore field. But it is a huge field that includes some really smart fillies and mares, such as Steps In Time, Royal Descent, Dear Demi, whose second up record is excellent, last start winners Bonaria and A Time For Julia, and Sweet Idea who was on a three run winning streak, until failing in the Surround Stakes.

As well as the two aforementioned Group 1 races, there are several other truly interesting competitions, in particular the Golden Slipper preludes – the Group 2 Todman Stakes for the boys and the Group 2 Reisling Stakes for the fillies – where I will get to see Unencumbered (Todman Stakes) and Earthquake (Reisling Stakes)  in action. Both of these youngsters are highly fancied for the Golden Slipper, Earthquake currently being the favourite after her stunning win in the Blue Diamond Stakes.

Hopefully the weather in Sydney will not be too wet and that a storm will not delay the racing action as it did last week at both Bendigo and Warwick Farm.