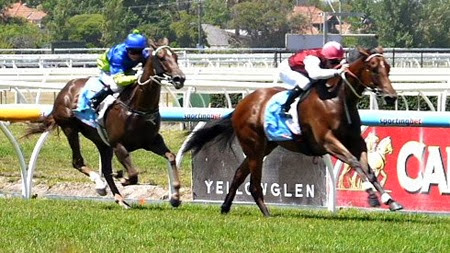 Heart pounding action awaits the keen racing fan this coming Saturday with Melbourne’s autumn racing carnival revving up the excitement at Caulfield with the running of the Blue Diamond Stakes along with two other Group 1 races and other choice Group 2 and 3 contests.

I have been to the Blue Diamond meeting for the past two years, so I have no intention of missing this one, which promises many delights, as well as cool and cloudy weather as opposed to hot and humid.

More stars of the turf will be resuming at this meeting, notably the past two Melbourne Cup winners Fiorente and Green Moon in the Group 2 Peter Young Stakes. It’s run over 1800 metres so it suits the stayers gearing up for the Australian Cup in a few weeks time. Also part of the field is Foreteller who ran a creditable fourth in the Orr Stakes,  and second up could steal the prize, Western Australian God Has Spoken who recently ran second in the Perth Cup and sole mare, Let’s Elope’s granddaughter, Let’s Make Adeal who was last seen running third in the Queen Elizabeth Stakes in November. Fiorente will probably start as favourite, but he is not known as a first up winner. Even so he is the classiest horse in the race.

The first scheduled Group 1 race is the Futurity Stakes run over 1400 metres. it has attracted an interesting field of contestants, that includes Orr Stakes winner Moment of Change, Manfred Stakes winner Bull Point and Polanski finally starting his autumn campaign and thrown in at the deep end.  Both Polanski and Bull Point are having their first starts in open company, previously winning against their own age group. All Too Hard won it last year, so one of the aforementioned three year olds could prove successful again.

Following the Futurity Stakes, the Group 1 Blue Diamond Stakes has the usual full field of smart two year olds in contention. But some are more gifted than others. The leading contenders are of course Rubick and Earthquake who proved their superiority in the Blue Diamond Preludes. However both of them have been disadvantaged in the barrier draw, Rubick drawing Barrier 10, and Earthquake Barrier 15.  Nayeli who is certainly a serious rival to above two, judging by her win in the Chairman’s Stakes, has drawn Barrier 9. Ideally drawn Jabali (Barrier 3) could cause a boilover, as could Nostradamus (his half brother Star Witness won the race in 2010) and Chivalry, who ran third to Rubick in the Prelude.  It being a two year old race, anything could happen and probably will. I’ll be on Earthquake as
I think she’s super special.

The final Group 1 of the meeting is the Oakleigh Plate, a sprint over 1100 metres. It has a huge field of 18 runners. the main chances being the in form Lankan Rupee, the speedy Shamal Wind, the trusty Spirit of Boom, the on a winning streak Knoydart and the Chris Waller trained mare Dystopia who beat Shamal Wind back in November.

In Sydney at Randwick the feature race is the Group 2 Apollo Stakes, where Boban will be out to redeem his reputation. He will have to contend once again with Appearance who is a major threat, especially if the track is on the soft side.

And it’s good to see wonder filly Guelph resuming in the Group 2 Light Fingers Stakes. Mindful that Guelph was beaten first up last time, her major threats are Sweet Idea who has won her last two starts, Real Surreal who is returning from a long spell, but had winning form prior to that, and Zanbagh who was last seen running second to Kirramosa in the Crown Oaks at Flemington in the spring.

It looks to be a wonderful day of racing all up and I look forward once again to being present at the track to see it all and take in the vibe of first class racing,