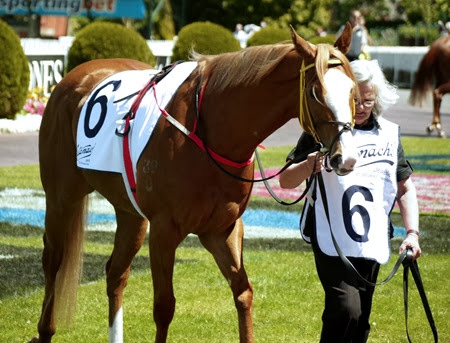 Miracles of Life makes a welcome return to racing this Saturday

Racing this coming Saturday is at the wide open spaces of Flemington Racecourse and the feature race is the Group 1 Australian Guineas. It’s a 1600 metre race for three year olds, and this year’s field has quite a few likely chances, so it’s a bit of puzzler to figure out the winner.

First off you’ve got Cox Plate winner Shamus Award, who recently ran third to Moment of Change in the Orr Stakes, then you’ve got Eurozone who almost stole the race, missing by the shortest of  margins. Hucklebuck, the current Australian Guineas favourite, who looked very good winning the Group 3 CS Hayes Stakes is another, as is Thunder Fantasy who returned to racing on a winning note, taking out the Group 2 Autumn Stakes by a comfortable margin.

Also worth consideration are others like Prince Harada, Rock Hero, and The Quarterback who were placed in one or other of  the aforementioned preparatory races. Polanski is missing from the field, and indeed will be missing from the racetrack from here on, the injury he sustained in the Futurity Stakes last week ending his racing career.

Anyone remember the 1980s radio show on 3RRR called Punter to Punter? I have fond memories of the show especially when I see the Frances Tressady Stakes on a racing program, after the “punters” ingrained it in my psyche by singing the race name to the tune of “Here we go gathering nuts in May”.  They also had an hilarious section called Trivial Form Guide where they formulated a cryptic discussion using references from the form guide.

It just so happens that the Group 3 Frances Tressady Stakes for fillies and mares is on the support card at Flemington this Saturday. It is named after a filly who won the rare double of the Victoria Derby and the Victoria Oaks in the same season in 1923 .  A field of handy mares, no fillies, will be contesting this year’s edition of the race. Top chances are former Western Australian mare Power Princess, Sino Eagle who won her last start,  the smart Floria resuming and Five All who was successful two starts back before being beaten by Sino Eagle.

Miracles of Life has not been seen since running unplaced in the Blue Sapphire Stakes in October last year. She suffered an internal haemorrhage on that occasion, but is back in good health by all accounts. She will be up against the older horses for the first time in a 1000 metre sprint down the Flemington straight, the race being the Listed Bob Hoysted Handicap. As her regular jockey Lauren Stojakovic is recovering from a race fall, Miracles of Life will be ridden by Corey Brown, so it will interesting to see how he fares with her. Whether “Barbie” can win the race is in the lap of the gods, but I’ll certainly be cheering her home.

There are three excellent Group 2 races in Sydney this Saturday at Rosehill. The first of these is the Millie Fox Stakes for fillies and mares run over 1300 metres. Sterling performer Red Tracer begins her autumn campaign in this.  She faces six opponents who include Royal Descent who won the Group 1 Australian Oaks last autumn, A Time For Julia who won her last start  in Melbourne. Red Tracer is the class mare in this race and should win.

The second Group 2 competition at Rosehill is the Silver Slipper Stakes  for two year olds. It’s a sort of early prelude to the Golden Slipper and is 1100 metre sprint. The most interesting runner is Unencumbered, who won the Magic Millions Two Year Old Classic in January and has been spelling since.  He is currently second favourite for the Golden Slipper behind Earthquake and is a very talented colt who will most likely win this race. His main rivals appear to be Law and Risen From Doubt who both have recent winning runs on the board.

I’m also interested in watching the feature race, the Group 2 Hobartville Stakes, a race over 1400 metres for three year olds.  My attention will be on It’s A Dundeel’s stable mate Atlante, who won the New Zealand Guineas at his last start. He’s up against a classy field that includes the well performed Dissident, Romantic Touch, Savvy Nature and Woodbine.

Still on racing, I have been reading over the past few days Les Carlyon’s terrific collection called True Grit, which covers his observations on horse racing over a 40 year period. He’s a wonderful writer who can conjure up in a few choice sentences the atmosphere, romance  and excitement of first class racing and bring to life both the human and equine characters of the turf.