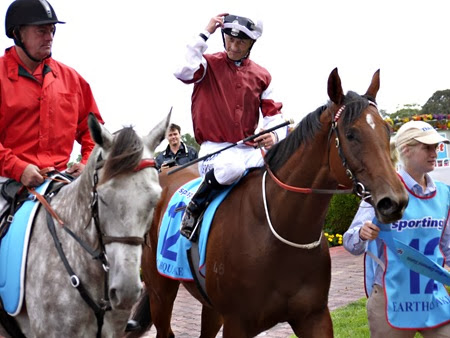 As expected it was a wonderful day of racing at Caulfield on Saturday. The weather was kind and the racing action was first class throughout the afternoon.

As the meeting was programmed to start later in the day, I took my time getting to the track, arriving just before 3.00pm in time to hear Race 3, the Angus Armanesco Stakes  being broadcast. It was won by Spirits Dance who surprisingly didn’t start favourite, despite having won her last three races.  The beaten brigade were Marianne and Metaphorical.

I decided to visit the stalls area first, hoping to catch a glimpse of Fiorente and sure enough he was there, being walked by his strapper in the walking ring. 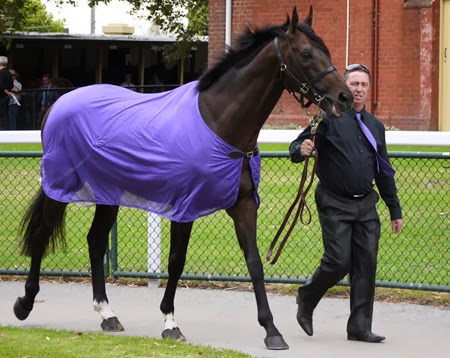 Fiorente in the walking ring

He certainly is a head turner, a magnificent looking horse as I’ve remarked before and as people standing near me exclaimed in wonder.

When the next race was about to start, I decided to head to the lawn and watch it from the fence. It was the Group 2 Autumn Classic, a race for three year olds over 1800 metres.

Autumn Classic finish down the straight – Vilanova (blue & white)  is about to overtake Alpha Beat.

The Chris Waller trained Vilanova, who started a big odds, was the winner, storming home from the tail of the field to win from Countersnip and Alpha Beat.

Despite being only a Group 2 race, the Peter Young Stakes was one of the most highly anticipated of the day, due to the resumption of 2013 Melbourne Cup winner Fiorente. Also part of the field was 2012 Melbourne Cup winner Green Moon and sundry other stayers beginning their autumn campaigns.

I watched them parade in the mounting yard… 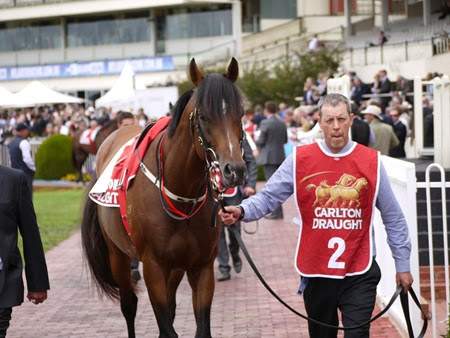 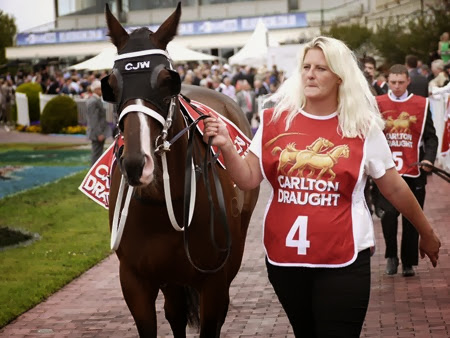 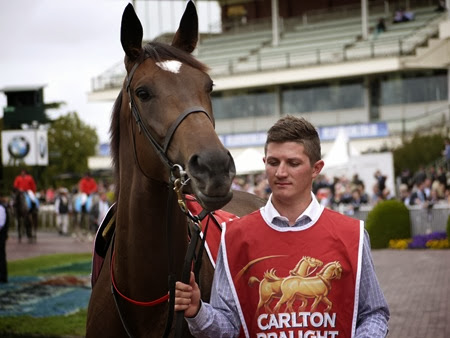 Fiorente started as warm favourite and he won narrowly from Mourayan  after a gritty run down the straight where he appeared to have no chance. Star Rolling who led for most of the race managed to hang on for third place. 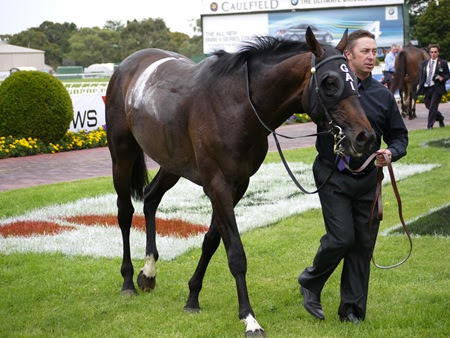 The first of the Group 1 races was the next race on the program, that is the Futurity Stakes.  The three year old challenger Bull Point started as favourite, but it was Moment of Change who led from start to finish and was victorious, adding a third Group 1 win to his CV and his second in as many starts.  Unfortunately Polanski was injured during the race and his future racing career is in doubt.  Sertorius flew from the back of the field to run second, with old Pinwheel hanging on for third. Bull Point was outclassed by the older gallopers and finished fourth. 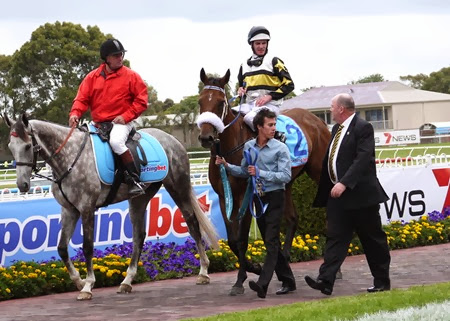 Moment of Change returns to scale after winning the Futurity Stakes

By this time it was getting on for late afternoon and the Blue Diamond Stakes was up next, scheduled to start at 5.10pm.

I watched the field assembling in the mounting yard. 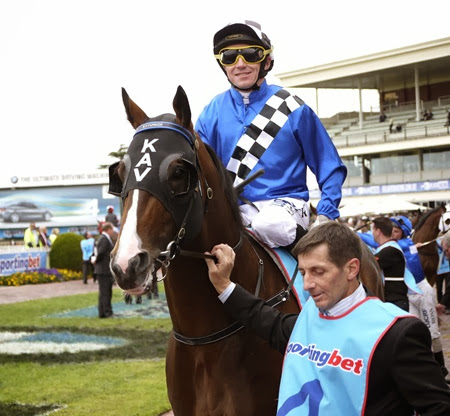 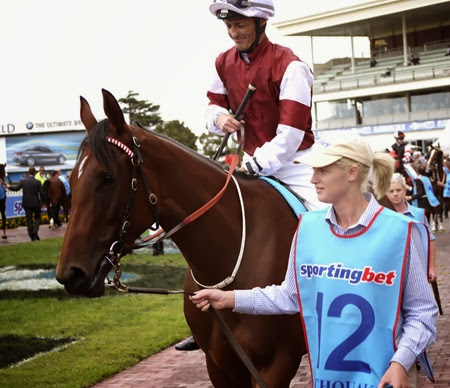 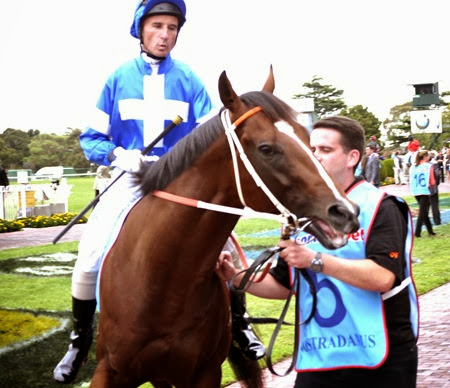 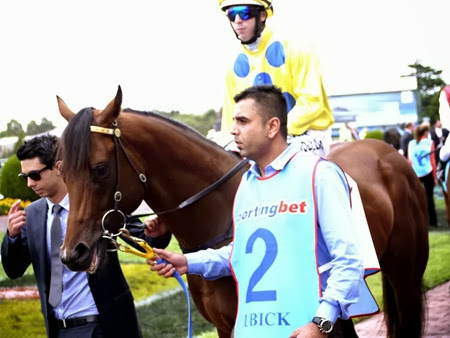 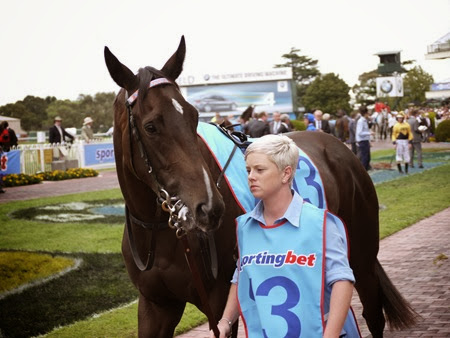 We were all expecting a fierce contest down the straight between top filly Earthquake and top colt Rubick, but that didn’t happen.  Rubick was up with the leaders for most of the race, but jockey Damian Browne bided his time on Earthquake and let her go in the straight where she effortlessly sailed past all and sundry to score a soft 1½ length win from Jabali. Long shot Cornrow ran third. I said I thought Earthquake was special when I saw her win the Blue Diamond Prelude, so I’m delighted she confirmed my first impression.

The final Group 1 of the day was the Oakleigh Plate and at first I decided I wouldn’t stay for it, but changed my mind.  I’m glad I did as I got to see potential sprinting super star Lankan Rupee winning his first Group 1 race, and fourth run in sequence. He’s a really pretty horse with an unusual, perfect, heart marking on his forehead. 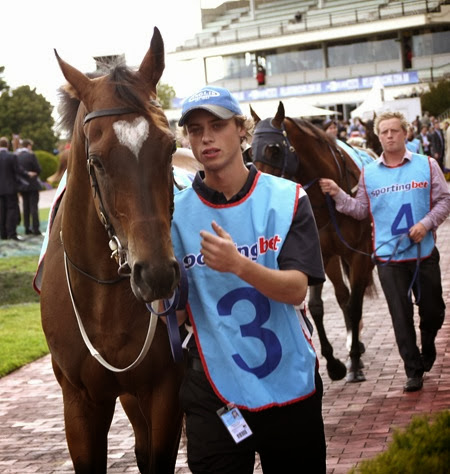 He of course was favourite after he’d blitzed his rivals in the Group 2 Rubiton Stakes in early February.  This was his hardest assignment to date and he passed with flying colours, beating the huge field comfortably. 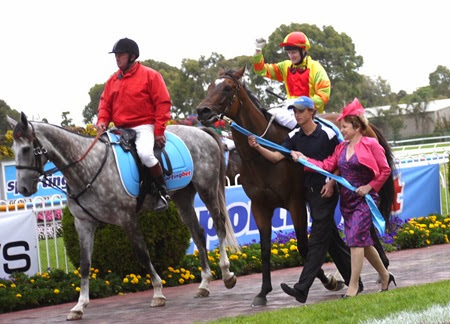 Lankan Rupee returns to scale after winning the Oakleigh Plate

I called it quits after the Oakleigh Plate even though there was one more race to go. The trains coincided nicely on the way home and I made it by 7.00pm.

It was a long, but enjoyable day at the races. The course was not all that crowded, so it was easy to watch the races, buy a drink or put on a bet. Some bookies were offering a 10% bonus on winning bets as part of a deal with Racing Victoria, but alas all my bets were unsuccessful. I didn’t follow my own advice and foolishly went for likely long shots.

There are only three more Group 1 race meetings to go in the Melbourne Autumn racing carnival. Next week the action is at Flemington for the running of the Australian Guineas.  I’ll be there of course - with bells on.

In Sydney, Boban disappointed in the Apollo Stakes but Appearance starred again scoring another sensational win. Guelph finished out of the placings in the Light Fingers Stakes, and didn’t show any of her characteristic dash. Hopefully it was just an off day for her, for we do need equine heroes to make up for Black Caviar.