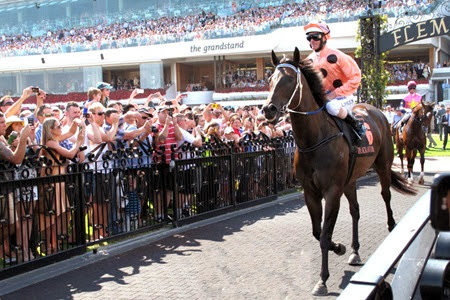 More racing excitement is on the way this weekend with Flemington Racecourse hosting the Group One Black Caviar Lightning and several other interesting events.

The Black Caviar Lightning, formerly known as the Lightning Stakes, was renamed last year to honour the great mare. She is sorely missed from the racetrack, but at least the 2014 field won’t have to contend with her and her great rival Hay List, nor current sprinting star Buffering. So it’s wide open, with a slightly crazy list of acceptances, that includes a pair of two year olds (Boomwaa & Bugatty), a trio of three year olds (Thermal Current, Bernabeu & Brilliant Bisc) and sundry older sprinters, chief among them brilliant mares Snitzerland and Samaready.  Most of the field are first up after a spell, so it’s anybody’s guess who will win, but I fancy the two mares and can’t decide which one has the better chance.

The other really interesting race on the cards is the Group Three
CS Hayes Stakes for three year old colts and geldings run over 1400 metres. Polanski, if he has recovered from the skin rash that caused his scratching last week, will finally start his autumn campaign.  His main opposition comes from Criterion who ran fourth behind Polanski in the Victorian Derby, Hucklebuck who won his first start back from a spell, Worth A Ransom, The Quarterback and Prince Harada who all have a run under their belts, finishing second, third and fourth behind Bull Point in the Manfred Stakes. I really want Prince Harada to show some of the brilliance his trainer insists he has, but he’s been most disappointing in general.  His only two wins were on heavy tracks, so perhaps a soft track is what he needs.

The other group race at Flemington on Saturday is the Group Three Mitty’s Vanity for three year old fillies, also over 1400 metres.  Top picks are the amusingly named Scratchy Bottom who won her last start, Girl In Flight who has won all three of her starts, Solicit who ran third in the Crown Oaks and Lights of Heaven’s little sister Spirit of Heaven.

In Sydney at Rosehill there is an interesting race card as well where the Group Two Breeder’s Classic is the feature race, It has a super field of smart mares that include Streama, Catkins, White Sage, Steps In Times, Sharnee Rose and Driefontein.  I’m most interested in Catkins and also another grey mare White Sage who is unbeaten in five starts. Should be a ripper of a race.

On the subject of Sydney racing, New Zealand star It’s A Dundeel will kick off  his autumn campaign in the Chipping Norton Stakes at Warwick Farm in early March.  Alas he won’t be seen in Melbourne, but I’ll be keenly following his progress nonetheless. He now has a great web site, just launched.  Check it out and particularly the video of his strapper Emily Murphy talking about her ideal boyfriend.

I’m looking forward to returning to Flemington this Saturday. At least I won’t have to pay entry as my Flemington season’s ticket covers entry to the course up to the end of July.  Also my old favourite Apache Cat may be there, so I’ll be delighted to see him again. He won the Lightning Stakes 2008.