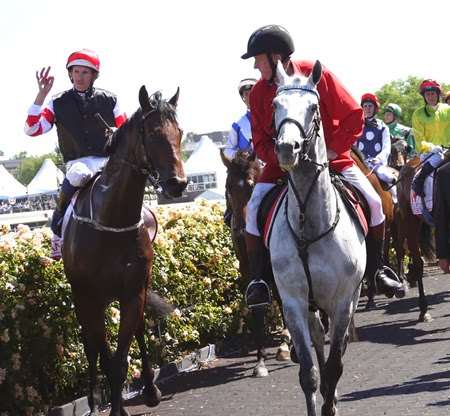 If you have never visited Flemington Racecourse, you would not have experienced the overwhelming wonder of the roses, luxuriantly in bloom over the period of the Spring racing carnival. The mounting yard is surrounded by a hedge of roses, as is the fence all the way down the straight, and the mounting yard gates have yellow climbing roses entwining the ornate wrought iron gate posts on each side. 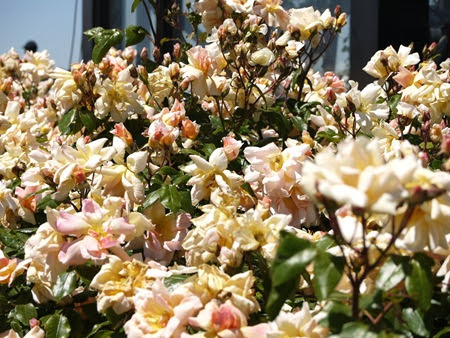 Rose hedge where I was standing when watching the races

As expected the crowds were overwhelming as well, but despite that I managed to find a good position on the fence next to the pathway where the horses leave the mounting yard for the track, so was able to photograph the horses as they went out to the track and returned.

I planned to arrive at the track in plenty of time to see Race 4, the first of the Group 1 events, and arrived early enough to witness Race 3, the Group 3 Lexus Stakes, a distance race over 2500 metres.  It was won by Irish invader Ruscello who gained  entry into the Melbourne Cup with the win. Granddaughter of 1991 Melbourne Cup winner Let’s Elope,  Let’s Make Adeal ran second with Araldo filling third place. 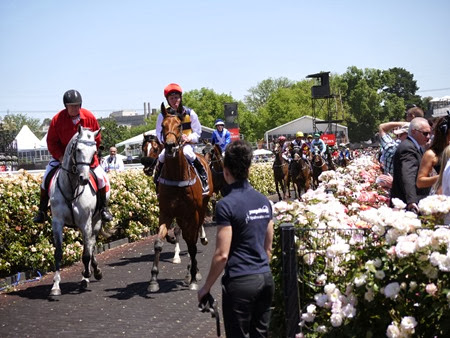 Ruscello after winning the Lexus Stakes

By contrast to the public lawn and the rest of the course, the stalls area was sparsely populated as is usually the case, so thence I went to catch the parade of contenders for the Coolmore Stud Stakes. Zoustar, the hot favourite was being saddled up… 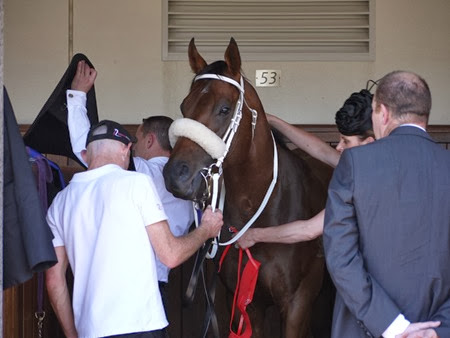 Zoustar in his stall being prepared for the race 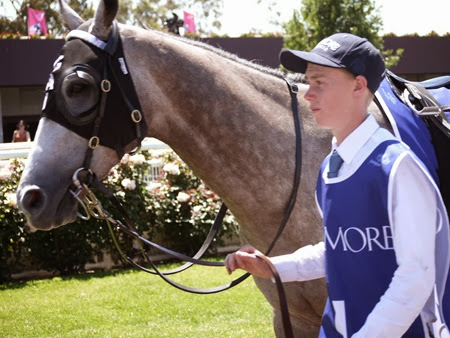 Divine Calling in the Parade Ring 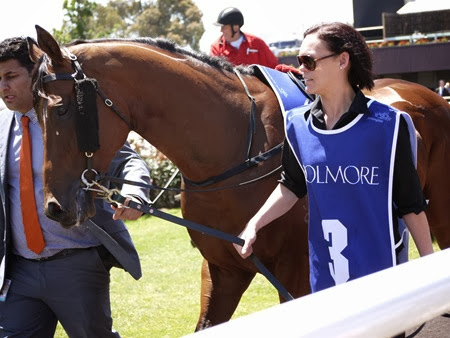 Returning trackside I found a position on the fence beside the mounting yard path and was able to photograph the runners as they made their way to the track. 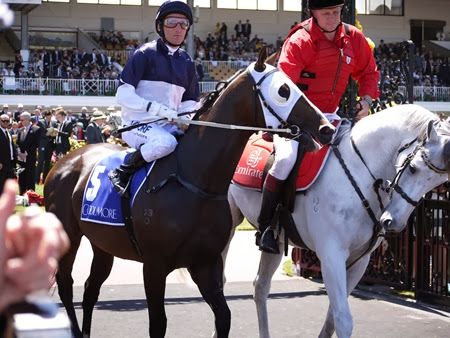 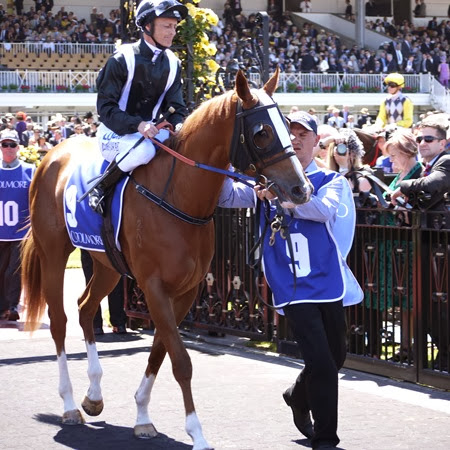 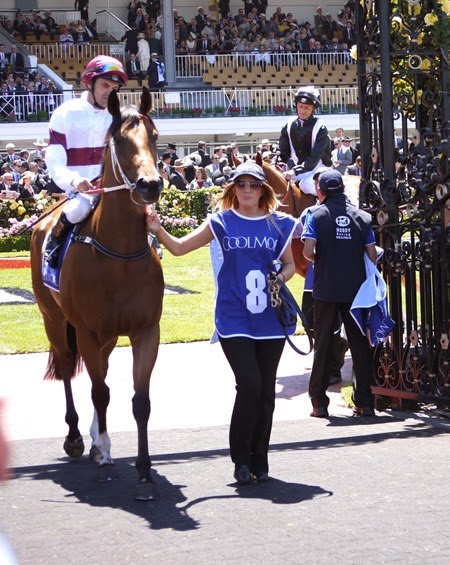 Zoustar was sensational and won by a length from Not Listenin’tome with Lion of Belfort running third.

Zoustar returns to scale after winning the Coolmore Stud Stakes

The next race on the card was the Group 1 Mackinnon Stakes and Jet Away was the favourite. I decided to have a bet on this race, my first for the afternoon, and went and queued at the nearest bookie to have a wager on Dear Demi, whose odds were quite good.

Back on the fence, the runners eventually moved out onto the track… 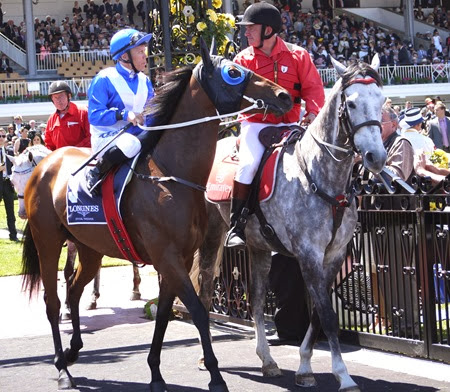 Cox Plate International invitee Side Glance, who ran sixth in that race, made the trip worth while by winning the Mackinnon Stakes, from Dear Demi and Moriarty. He’s a very good looking horse I must admit. 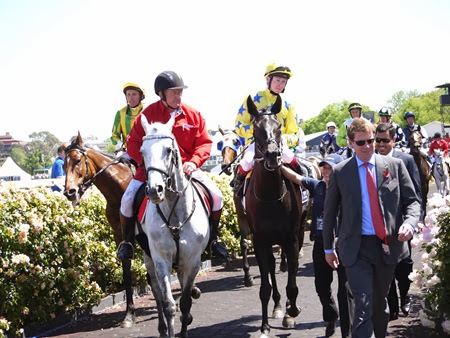 Side Glance returns to scale after winning the Mackinnon Stakes

The feature race was next on the program, so I made sure of my position well before the field left the mounting yard. 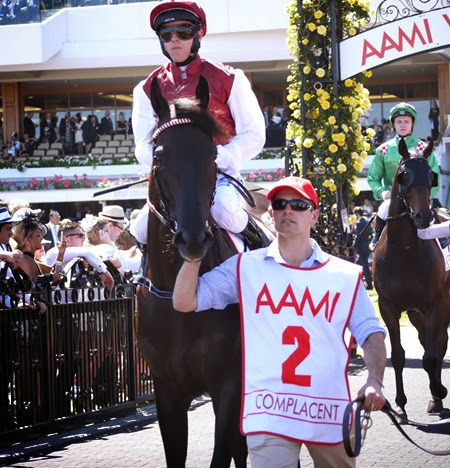 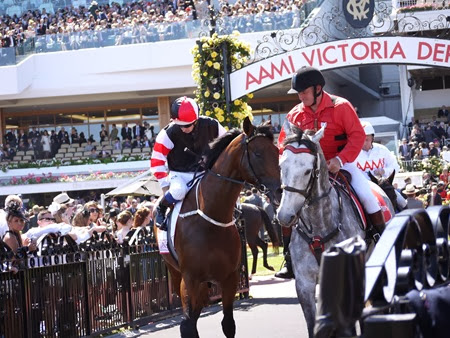 Polanski, a horse that only cost $4000, won the race easily. A feel good story if ever there was one. My pick Complacent ran second and 30/1 long shot Thunder Fantasy took out third spot.

The final Group 1 race of the day was the Myer Classic for fillies and mares. I was keen to see how Catkins would go in it against her classier stable mate Red Tracer. Catkins led practically from start to finish and was only beaten by Red Tracer on the line – by a nose. Fire Up Fifi ran third. 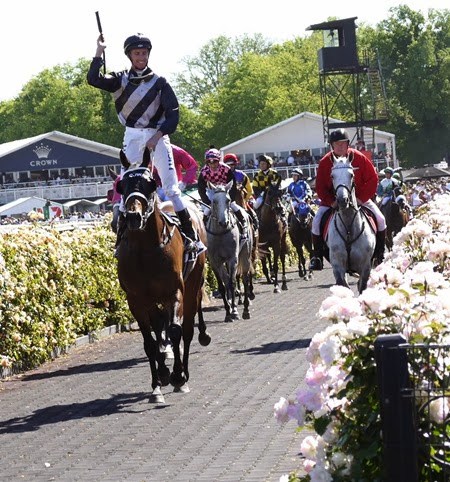 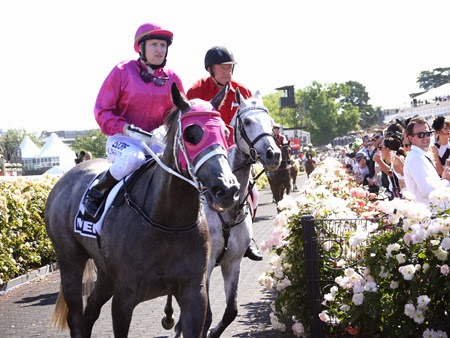 I didn’t bother staying for the last two races, so after collecting my winnings on Catkins I headed for the station.

So that was my Derby Day. My trepidations about the huge crowd were largely correct, but despite that it was fairly easy to move through the masses and also escape them in the stalls area. The queue to get a drink was long and the wait was tedious, but as I had one beer all afternoon I only had to endure it once. 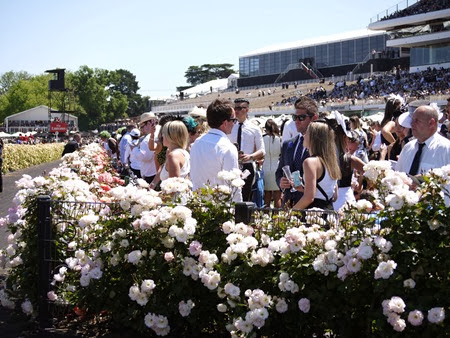 And I was pleased that my previous explorations of Flemington racecourse had equipped me to find the best spots for taking photos under the circumstances. I was surprised the spot I found on the fence was unoccupied before each race.  This was probably due to the area directly in front of it being taken up by broadcasting equipment and camera persons, which obscured the view of the big screen. I didn’t mind as I could see enough to gauge the pattern of the race. The below photo is of the press corps. The lady with long blonde/red hair and huge camera is Bronwen Healy, who takes wonderful photos of racehorses that make mine look amateurish which I freely admit they are. 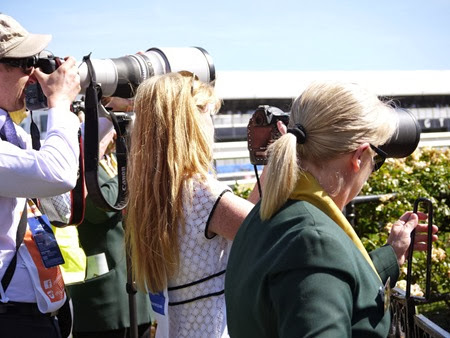 The next race meeting is the Melbourne Cup on Tuesday. I have decided not to attend it, but will probably go to the Oaks on Thursday and Emirate Stakes day next Saturday.

I’ve rushed this entry, as I wanted to get it posted tonight. Tomorrow I’ll post my thoughts on the Melbourne Cup.