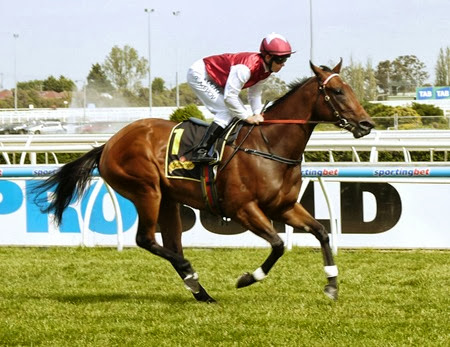 I wasn’t going to review the Thousand Guineas, but as the afternoon was quite interesting after all, and because I managed to snap some good photos, it’s worth writing about.

Arriving just before the Race 3, I was able to watch the running of the inaugural Subzero Challenge, the first of a series of three races restricted to grey horses.  The series is of course named after racing’s best known equine Community representative, 1992 Melbourne Cup winner Subzero.

Old Subbie was there to lead the field out, looking quite spry for his age… 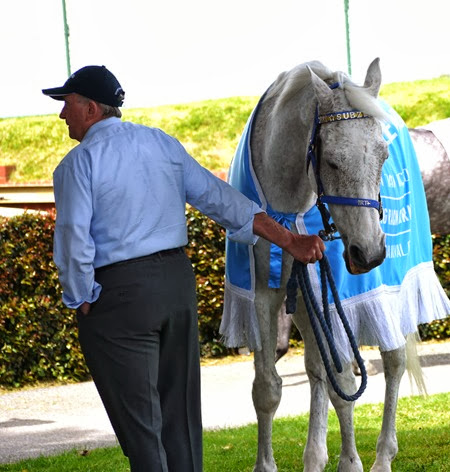 The race is run over 1400 metres, and, if you were partial to greys, there were 15 to choose from. I opted for Specter, who ended up starting favourite.

Down the straight toward the finish line, Freshwater Storm has lengths on the rest of the field

Shortly after the Subzero Challenge, It’s A Dundeel was led to the mounting yard preparatory to his scheduled gallop on the course. 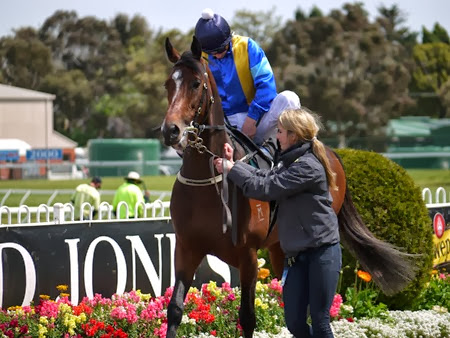 It’s A Dundeel in the mounting yard, James McDonald in the saddle with strapper Emily in attendance.

He galloped round the track, the mini event being screened live. Very few spectators were watching from the fence when he dashed down the straight, but I was there and snapped him in action. It was a change to see him running without blinkers. 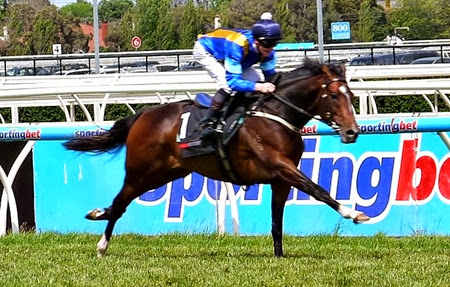 He looked spectacular, and certainly didn’t show any sign of lameness. Bring on the Cox Plate!

There were two more races before the main event, which weren’t that interesting, so I took myself off eventually to the parade ring to await the emergence of the fillies for the Thousand Guineas.

As well as being keen to get a glimpse of star filly Guelph I wanted to see the Darren Weir trained May’s Dream. She is a daughter of  She’s Archie who ran second to Makybe Diva in the 2003 Melbourne Cup, won the 2002 South Australian Oaks and 2004 Stocks Stakes and was also trained by Darren Weir. 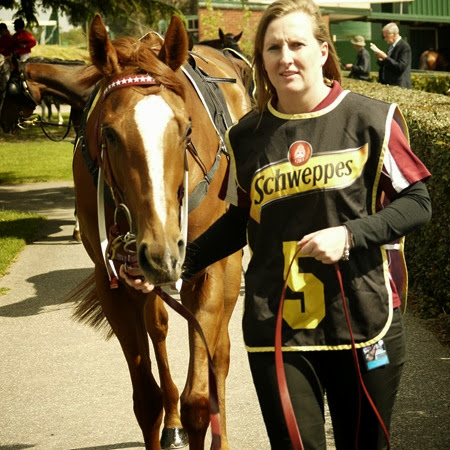 May’s Dream in the parade ring

May’s Dream has shown great promise in her short career and was considered one of the top chances for the race, and indeed threatened to overtake Guelph in the straight. 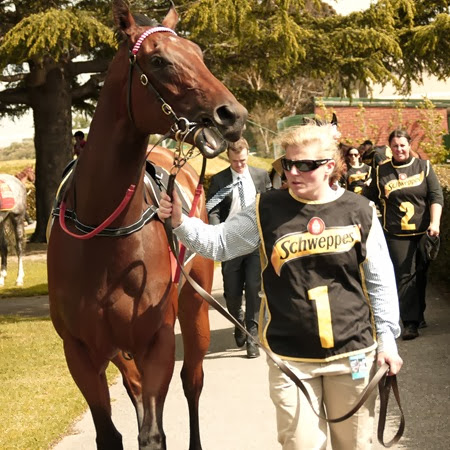 Guelph in the parade ring

Guelph lead the race from start to finish and even though May’s Dream did threaten her at one stage, she won easily in the end. The game May’s Dream finished second ahead of Gregers who ran third.

The Thousand Guineas finish – Guelph leads, with May’s Dream behind her and Gregers in third spot.

Guelph has now won four Group One races, a pretty good record for one of her tender years. Her dam, Camarilla was also a Group One winning mare, who won the Sires Produce Stakes and Blue Diamond Prelude in 2007, which interestingly were won this year by her daughter Guelph. 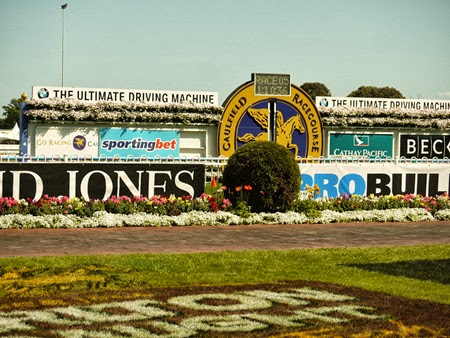 View of Caulfield finishing post from the mounting yard

As usual the Caulfield Cup is a puzzler in terms of trying to work out the likely winner. This year it is slightly easier, as I do recognise the names of all the eighteen horses in the field, and have some idea how they will fare in the race.

The only horse in the field whom I have not witnessed racing is the recently arrived British horse Dandino who is widely travelled, having won races in the UK, Hong Kong and USA.  Whether he has acclimatised to Australian conditions, or is able to handle the local racing patterns, is yet to be seen. Mindful that the Caulfield Cup has been won by European raiders in the past – Dunaden last year, All The Good in 2008 and notoriously, Taufans Melody in 1998 – it’s not beyond belief that Dandino can take home the prize, especially as Craig Williams is his rider. Craig Williams was the winning jockey last year and the year before. Can his luck extend to three consecutive wins this year?

Among the locals who have an excellent chance are the Chris Waller trained Hawkspur, who is my top pick, and Royal Descent. The former won the Queensland Derby and the latter the South Australian Oaks, so they can certainly handle the distance (2400 metres) and are in good form this spring.  New Zealand mare Silent Achiever is a good light weight chance, has been particularly aimed for this, and has the services of top jockey Glen Boss.

Of the imported stayers who have raced on Australian tracks with some success are Fawkner, the only representative from Lloyd Williams stable in the race, Jet Away who won a much easier race at Caulfield two starts ago,  Chris Waller’s other two runners Moriarty and Kelinni and Gai Waterhouse’s Julienas.

The field in fact is pretty evenly matched, but my thought is that the abovementioned have more chance than those not mentioned. I’ll be cheering for Hawkspur who is currently the deserved favourite.

I will not be attending the race in person, and I’m quite relieved that I’m not going. Racing carnival lag is threatening to set in, and besides the Caulfield Cup is scheduled as the last race of a ten race card, and will run at 5.45pm and I’m not keen to go through that experience again after last week’s Caulfield Guineas meeting.  The Cox Plate next weekend is of more interest to me, and that I wouldn’t miss.

It will be quite a change to watch the races on free to air TV, as I used to do in the past. Though not quite as exciting as being there in person, in truth the visuals of the entire race are much better on the box.

Fawkner has won the Caulfield Cup. I was wrong about his origins above; he is in fact 100% locally bred from Reset by Dane Belltar. It all gets a bit confusing as Lloyd Williams has of late been importing his horses from overseas, and if you fail to check the pedigree, you draw false assumptions.

Dandino ran second and the ever consistent Dear Demi came third. Hawkspur ran seventh. However, I didn’t have any money on the outcome, so no loss, no gain.