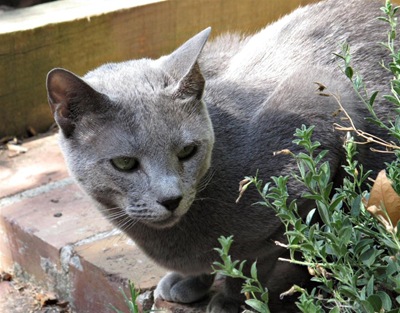 Talya has now been with us for a week and she has settled in very well showing no inclination to return to her old digs. In fact she’s gone quite feral, reverting from an indoor cat to an outdoor cat in a very short time. She appears to enjoy the garden (both back and front) and spends most of her time in it. It must be a reaction to her years of confinement, as she is very insistent in getting out and about and communing with Mother Nature.

She even worked out how to open the back sliding door. It’s a great heavy thing, but the frame is not square, so there is a gap where a resourceful and intelligent pussycat can insert a paw and lever the door open to a width which allows escape. I kept wondering why the sliding door, which I was sure was closed, was always slightly open, until I twigged that Talya was doing it. B didn’t believe me when I told him -until he caught the cat the act. She’s a deep one is Talya.

As for the relationship between Willy and Talya, it is in a state of detente. They’re not fighting, but appear to be keeping a distance between them. Willy will deliberately lie in Talya’s path, so she either has to edge past him or go the long way around, and Talya has taking to stalking Willy from behind, much to his obvious annoyance.

It’s early days yet, and it may take several months for the cats to relax completely in each other’s company. We wait and see.