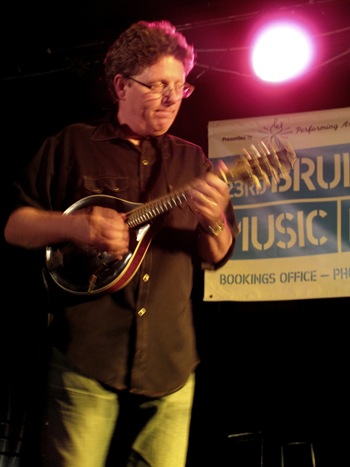 After queuing for 45 minutes in order to obtain some of the limited seating available last night at the East Brunswick Club, and enduring the scrum situation that resulted at the entry to the band room where two queues were converging from different directions, we managed to secure front row seats for the Tim O’Brien show.

It was worth the effort, Tim putting on an engaging performance, displaying his effortless mastery of mandolin, fiddle and banjo.

There were two support acts, a guy called Christof, originally from the Netherlands, who played a short singer/songwriter set, winning over the audience with his natural unassuming charm.

He was followed by local duo Luke Plumb and Peter Daffy who warmed up the crowd with a fine set driven by their mandolin/guitar combo. Luke Plumb plays the mandolin with extraordinary passion, in an ornate style reminiscent of the Willy P Bennett.

Finally Tim O’Brien and his Two Oceans cohorts took the stage for a longish set full of wonderful, perfectly executed Americana tunes, mixed with a few of Tim’s originals. Tim O’Brien comes across as a genial soul, with a dry ironic wit. He’s fond of telling fiddle and banjo jokes.

I managed to snaffle the set list from the stage after the encore. Just as I did this Tim O’Brien came back to the stage for something. Thinking he was after his set list, I handed it to him, but all he did was sign it and give it back to me, much to the envy of at least one person in the audience. 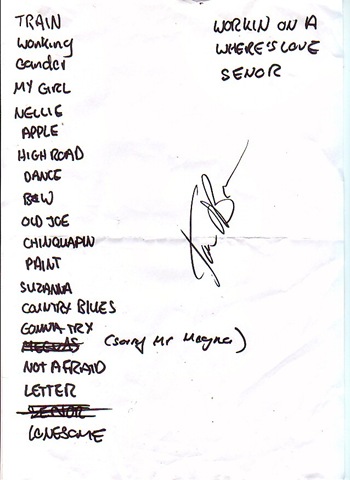 I also got Tim to sign my copy of his great Dylan tribute album Red On Blonde, wherein a selection of well known Dylan songs are given the Bluegrass treatment. It’s a CD I play often, always marvelling at the cleverness and listen ability of it.

Tonight I’m off to see Justin Townes Earle at the Forum Theatre. It should be an ace show with Joe Pug as the support act.

Love the set list Annie. Beats trying to guess and jot them down yourself.
And I reckon the bluegrass renditions of BD are bound to better than the originals - but i'm biased!