The first Group One of the 2011 Autumn Racing Season 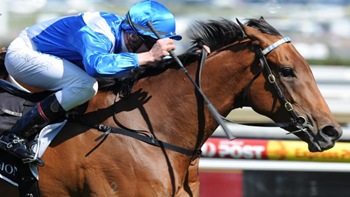 A fabulous day of racing is promised this Saturday with the first Group One race for the season , the CF Orr Stakes being the feature race at Caulfield with an accompanying plethora of Group two and three competitions in both Melbourne and Sydney.

The Orr Stakes (1400 metres) sees the resumption of familiar competitors from the spring season - Shocking, Zipping, Linton, Heart of Dreams, Spacecraft, Trusting and mares Typhoon Tracy, Ortensia and Faint Perfume. Typhoon Tracy won this race last year, and even though she didn’t win the Australia Stakes two weeks ago, she is a good chance to take out the Orr Stakes for the second time and most likely will start favourite. It’s a bigger and better field this year, but if she is back to her best she will win.

The two Blue Diamond Preludes (one for the boys and one for the girls) are also to be run this Saturday. Sepoy who convincingly won the Blue Diamond Preview is quite likely to win the colts Prelude as well. Grand Britannia who ran second on that occasion is his main opposition, along with Arctic Command and possibly Huegill from the Moody stable, having his first start.

In the fillies prelude One Last Dance looks the top pick again after her narrow win in the fillies Blue Diamond Preview at her last start, with second place runner Anevay being a major threat, but other well credentialed fillies like Glissade and Holdontoyahorses could steal the show, even so. And mindful of youngsters who win a debut race on a rural track by a good margin and often repeat that performance in the city, you can throw in Erbvebel as a chance.

The Caulfield track will most likely be rated dead, not like last week, where the races were abandoned due to flooding after heavy rain. It’s drizzling and gloomy as I write, but the rain is not expected to be severe.

In Sydney at Randwick racecourse, More Joyous resumes for the autumn in the Group Two Breeders Classic (1200 metres). Others in contention who might cause an upset are Sacred Choice who beat Typhoon Tracy last year in the Myer Classic, albeit on a bog track, Graceful Anna, who was soundly beaten at her last start, but is too good to dismiss out of hand, the well performed Jersey Lily and Sister Madly who has in the past given More Joyous a run for her money.

Also being run at Randwick, the Group Two Light Fingers Stakes (1200 metres) for three year old fillies witnesses the return of smart fillies More Strawberries, Parables, Obsequious though the top pick is probably Red Tracer who resumed a fortnight ago with a two length win in a listed race.

The colts and geldings will contest the Royal Sovereign Stakes, also a Group Two competition run over 1200 metres. It’s good to see Pressday resuming in this. He is the class horse in the race, but other well tried colts like Masquerader, Brightexpectations, Master Harry and Audacious Spirit could pull off a surprise.

Two of the races abandoned last Saturday were run on Wednesday at Sandown Hillside. The Chairman’s Stakes was taken out by Atomic, who certainly looked very promising at his first start, and the Manfred Stakes was won by Enjin Number Nine, by three and a half lengths, who looked even more promising. I’ve added him to my black book as one to watch for the Australian Guineas and beyond. He’s a son of champion Japanese stallion, Zenno Rob Roy who won the 2004 Japan Cup, not a sire you see mentioned in the Australia at all, though I’ll certainly be looking out for his progeny from now on.

Results
Well it appears my predictions were correct...

Sepoy blitzed the field of the Blue Diamond Prelude for colts & geldings again and One Last Dance won the fillies Prelude.

Typhoon Tracy is back in winning circles after narrowly winning the Orr Stakes for a second time, becoming the first mare to do so. Heart of Dreams came second again (as last year) and More Joyous won the Breeders Classic easily. Graceful Anna ran second which was a very good effort, considering the quality of the winner.

Typhoon Tracy and More Joyous will be competing against each other for the first time in the Futurity Stakes in a fortnight – can’t wait.