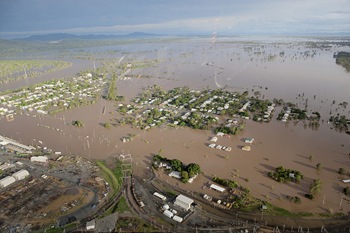 The entire world must know by now about the devastating floods which have inundated a large portion of the State of Queensland. It is unimaginable to us sitting at home cosy in Melbourne, to think of how the citizens of the northern State are coping with such a disaster.

I have had no direct experience of a flood other than one of my earliest childhood memories, where I remember being carried out to an army duck by a soldier during a flood in Wagga Wagga back in the late 1940s. I can’t recall being scared, but more excited by the unusual turn of circumstances.

Melbourne however has not been spared the wet. It has rained solidly all day, and I thanked my lucky stars that I didn’t have to drag myself to work in it and sit there all day with damp feet. As well as being wet it is also hot and humid and uncharacteristically tropical. The low pressure system that caused the Queensland flood is now passing through the southern States and has already caused flooding in a few rural Victorian towns.

Instead of sitting it out in the workplace, when the rain eased off for a while, I ventured down to the bridge over the Merri Creek to take a picture. Although the Merri Creek is basically only a block from where I live, there is no danger of it ever threatening our dwelling. It has steep sides and runs through a gorge at that point, so it would have to rise a considerable amount to cover the bridge.

As you can see the Merri in flood is pretty pissy compared to the Queensland version. 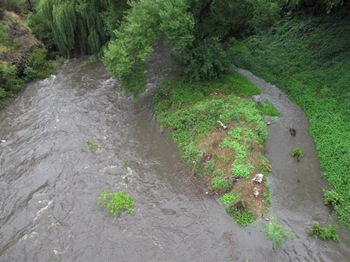 No doubt the Queensland flood, like the Black Saturday Bushfires of 2009, will dominate the news for weeks to come. In the meantime, more information can be found on the ABC online website.