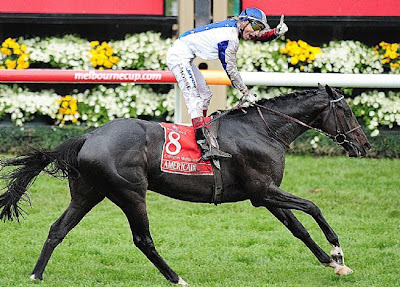 Melbourne Cup Post Mortem and the last race of the carnival.
Every man and his dog knows by now that American bred, French trained, black stallion Americain won the Melbourne Cup. The other black stallion So You Think ran third, a very good effort for such a lightly raced young horse. The disappointing news is that So You Think has been sold to Coolmore and we’ll probably never see him race again in Australia, as he’ll be sent to Ireland to be trained by Aiden O’Brien to race in Europe before being retired to stud.

Bart Cummings, who was not consulted, is said to be really upset by this news, stating rightly that So You Think was good for the local racing industry, in that the horse had all the hallmarks of becoming a “champion of the people”, like the great horses of the past. He also said that So You Think was the best horse that he’d trained and had not yet realised his true potential.

It is a great pity that big money snatches away our champions from Australia. It happened with that other Darley owned beautiful black stallion, Denman, who reportedly never settled in England and was retired to stud without racing again. Haradasun and Starspangledbanner were also sold to Coolmore, and though racing and winning in the UK, never graced the Aussie turf again.

Anyway, there is some consolation this weekend when the highly anticipated clash between Hay List and Black Caviar is set to take place in the Group One Patinack Farm Classic, a sprint over 1200 metres. The field is small (7 runners) but select, and includes, besides the two main attractions, All Silent, who won this race in record time last year, super sprinting mares Ortensia and Melito, and Star Witness who was back in winning circles last week, taking out the Coolmore Stud Stakes. It’s really hard to pick between Black Caviar and Hay List – the ideal result would be a dead heat between the two.

The feature race, the Group One Emirates Stakes (1600 metres), looks rather ordinary after the classy fields over the past week or so, the best of the bunch being Black Piranha who has mixed with the best in the past, ditto Sniper’s Bullet, Trusting, Allez Wonder and Captain Sonador. It’s an odd sort of race, being tacked on to the season as a sort of consolation prize for runners who failed to make the Cup or Cox Plate fields. It often yields an unexpected result.

Today is Oaks Day – one for the ladies. I’ve used a free bet from my online betting service - an apologetic free bet, to back five runners, one of whom, Brazilian Pulse, was the winner. IAS handed out free bets to its subscribers as it stuffed up badly on Cup Day, being unable to cope with the extra traffic to the site.

Ironically it is the reason I managed to get the Cup trifecta twice. I wouldn’t have resorted to the local TAB had IAS been working normally as I’d had a brain wave, after doing the Age cryptic crossword. The answer to a clue in the crossword was “campanologist”, and mindful of the fact that a similar helpful clue found Efficient in the 2007 Melbourne Cup (the answer then was Iron Horse), I had to put a small each way bet on Campanologist in this year’s Cup. As IAS was not accessible by then, I went to the closest TAB outlet to do so. Whilst there, I decided to get a Melbourne Cup Mystery Trifecta ($3.00 gets you a boxed random selection of three runners). I’ve had them before and it usually turns out that you get one or two placegetters, but this year my Mystery Tri was spot on. So the “campanologist” omen, though unsuccessful in purist terms, was a lucky break through some crazy twist of fate.

More thoughts on the Melbourne Cup; it is clear that the High Chaparral boys Shoot Out, Monaco Consul and Descarado didn’t stay the trip, in fact Descarado failed to finish, his jockey Nash Rawiller pulling him up before the end of the race sensing something was wrong with the horse. Fortunately there was nothing found amiss with him, so a big sigh of relief all round – it’s suspected he swallowed mud, being stuck on the rail for most of the trip and having it flung in his face by those in front of him. Zipping, bless him, ran fourth again and “out of the blue” newcomer Maluckyday, who scraped into the Cup at the last moment, did very well to come second.

All in all a memorable Melbourne Cup.