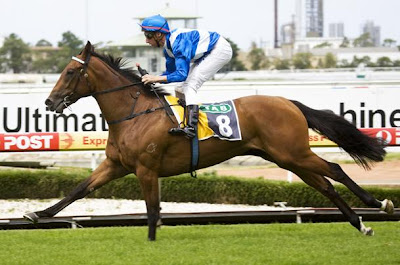 More Joyous - is she the new Sunline?
Let The Carnival Begin!
As we head towards the BIG three features – Caulfield Cup, Cox Plate and Melbourne Cup - the racing picture is becoming clearer, though surprises can still obscure the overall imagined outcome, and other than thinking that So You Think is a dead cert to take out the Cox Plate, who I will back in the Cups is still being pondered. Take last weekend for instance where nine year old Zipping took out the Turnbull Stakes, beating Shocking and Shoot Out into second and third place respectively in an exciting race down the Flemington straight, with Metal Bender and Typhoon Tracy finishing close behind. Zipping’s stable mate C’est La Guerre won his first race since 2008, the Group Three Craven Plate in Sydney – another surprise outcome. Last year, one must remember, another Lloyd Williams horse, Efficient, won the Turnbull, so it appears his stable of horses are beginning to shine at the right time. Linton is one of Williams’ horses who will have to win this coming weekend to get a start in the Caulfield Cup.

There are three Group One events to be run at Caulfield this coming Saturday, the feature race being the Caulfield Guineas.

The Caulfield Guineas is a race over 1600 metres for three year colts and geldings. A field of 16 smart young lads will be contesting. Top picks are Toorak Toff, Anacheeva, Ilovethiscity, Masquerader and Hollowlea, though one of the less fancied runners could take it out; Cosmonaut for instance who I rather fancy simply because he is sired by Starcraft and is trained by Bart Cummings.

The Group One Yalumba Stakes (2000 metres) has a mere five runners, many potential contestants obviously being scared off by the presence of So You Think who I can’t imagine not winning. Whobegotyou, who won this race last year, and ran second to So You Think in the Memsie Stakes as well as recently winning his second Dato Tan Chin Nam Stakes, is one of the game contenders along with old timer Master O’Reilly and Melbourne Cup hopeful Alcopop.

The exciting Sydney mare More Joyous, on the Cox Plate trail, will be having her first start in Melbourne in the Group One Toorak Handicap (1600 metres). She contends with a much larger field (15 starters), Gai Waterhouse opting for the Toorak over the Yalumba as an easier race for her star. The other mares in the race appear to be her main opposition; Allez Wonder who won this race last year is one, and Response the winner of the Group One Dubai Racing Club Cup on 18 September is another. The in form Spacecraft and last start winner Drumbeats appear the best of the boys, though the mystery Macau horse, Luen Yat Forever, whose overseas form looks excellent, may be the surprise packet.

Black Caviar, unbeaten in all her starts and now a four year old mare, makes a welcome return to the racetrack in the Group Two Schillaci Stakes, a sprint over 1000 metres. Black Caviar has not raced since her scratching just before the William Reid Stakes back in February this year, after an injury forced a long layoff. She’s up against the very smart Mic Mac, Blue Diamond Stakes winner Star Witness, Winter King to name a few. She is lucky new sprinting super star Hay List is not in this race, though both she and Hay List will meet later in the spring – a mouth watering prospect for racing fans, reminiscent of clashes between Alinghi and Fastnet Rock in the past.

The Group Two Herbert Power Stakes (2400 metres) is the last chance for non qualified Caulfield Cup hopefuls to qualify for the big one. Among them are Linton and Moudre. The Bart Cummings trained Precedence is the major obstacle to both of them and the rest of the field. Linton ran third to Precedence in the JRA Cup in his last outing. The extra 320 metres may make all the difference to the result.
Posted by Anne S at 4:11 pm