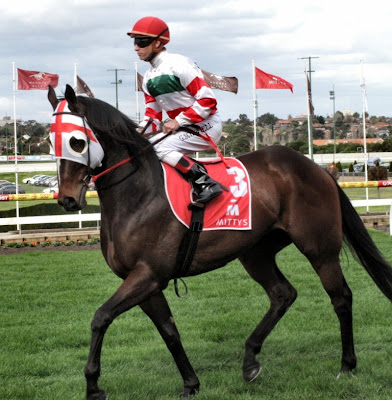 Hay List at Moonee Valley 11/9/10
As the AFL Grand Final is to be contested in Melbourne on Saturday, the Group One Manikato Stakes will be run on Friday night at Moonee Valley. It used to be run on the same day as the Dato Tan Chin Nam Stakes, but in their infinite wisdom, the MVRC split the accustomed program into two meets, no doubt hoping to augment their coffers. I’ve never been to a night meeting, but I believe they are quite well attended and as much fun as a day meeting, but I prefer the sun shining on the jockey silks and the glossy coats of the equine contestants.

A small but select field will be contesting the Manikato Stakes, a sprint over 1200 metres. Highly regarded seasoned sprinter, All Silent returns in this, but he’ll have to be pretty much up to scratch to beat the brilliant Hay List who I recently saw in the McEwen Stakes at Moonee Valley, where he won convincingly.

Reward For Effort who came third on that occasion has a chance to redeem himself as the track is likely to be rated good with little rain falling this week, suiting a horse who prefers it on the dry side. Other good runners who may surprise with an upset are Love Conquers All and True Persuasion. Hay List looks the winner on paper, despite his trainer having doubts about his ability to perform at night.

The race card at Moonee Valley looks very good over all with the Group Two JRA Cup over Cox Plate distance (2040 metres) giving stayers an opportunity to show off their talent. It’s good to see that Linton is part of the field. He’s won at Moonee Valley before, in the autumn, when I saw him win the Alister Clarke Stakes. Other familiar names are Alcopop, one of the favourites for last year’s Melbourne Cup, Precedence, Belscenica and last week’s Naturalism Stakes winner Rainbow Styling.

The Group Three Champagne Stakes, a race over 1200 metres for three year old fillies has a very classy field with the likes of Military Rose, Chance Bye, Solar Charged and Shaaheq all scheduled to run. Pretty tough picking the winner as the above mentioned fillies are all evenly matched.

In Sydney on Saturday, Randwick hosts the Group One George Main Stakes. Two Gai Waterhouse runners will, for the first time, be going head for head. Old warhorse Theseo and super mare More Joyous both tackle the 1600 metre race. It’s a small field that also includes Danleigh and Black Piranha. Can More Joyous, who blitzed the Theo Marks field winning by 3½ lengths, beat her stable mate Theseo? It will certainly be interesting watching her try.

Last week, So You Think was spectacular in the Underwood Stakes. Is he the new superstar we’ve all been waiting for? A magnificent looking horse, he seems to be invincible this spring. His stable mate Dariana was also impressive with her fighting second in the race, narrowly beating Metal Bender, who got a bit lost in the reverse going of the Caulfield circuit.

As for the AFL Grand Final on Saturday which will transfix most Melburnians to their TV sets, I’m hoping Collingwood can defeat St Kilda and win their first final for twenty years. Though I don’t as a rule follow football, it can’t be totally ignored in Melbourne, being embedded into the culture of this city. If people ask who my favourite AFL team is I always say the Magpies (Collingwood); contrarily the most loved and the most hated team in the league.

I still remember the last time Collingwood won in 1990. We were flying out to the Solomon Islands the morning after the game, and the airport was full of hung overed fans stumbling through the metal detector, still dazed after the celebration.

WOW! The AFL Grand Final ended up in a draw, so the footy season is not over yet. The Final will be recontested next week.

As for the racing, the two winners of the Group One events this weekend won easily.

Hay List slaughtered the Manikato Stakes field in sensational fashion. What a brilliant sprinter he is!

More Joyous won the George Main Stakes by several lengths. She will eventually be contesting the Cox Plate. Look out, So You Think!
The spring racing carnival is shaping up to be one the best in years.
Posted by Anne S at 11:43 am