It has been a while since I last wrote about the cats.

Both are still happy and healthy though Ms Lizzie, being now a senior citizen, is less active and spends most of her days indoors. She had a close encounter with a brush tailed possum last week which we were astounded to witness. Due to a light illuminating the decking outside the backdoor, for once, it was a remarkable sight.

The possum came from the back yard and marched across the decking close to where Lizzie was sitting minding her own business. The encounter, thankfully, did not result in violence. The possum paused when it saw the cat and peered at her short sightedly, no doubt thinking she could be another of its kind, her colouring being very similar to that of the marsupial. Lizzie sat there, unmoving, and eventually the possum just ambled on its way and onto the fence and up into a tree with the cat showing no inclination to follow. It was gratifying to see that Lizzie at least is peaceful towards the native animals. She obviously realises she wouldn’t have a hope against a brush tailed possum – they’re formidable beasts.

Here’s a recent photo of Lizzie basking in the winter sun. 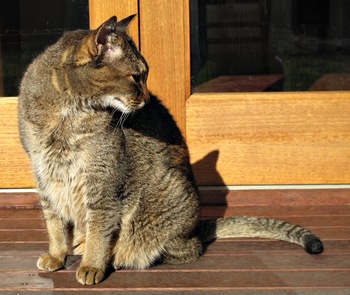 The wilful one, Willy, still runs wild in the streets, though he does spend more time at home now that it’s cold. He has been responsible for the importation of several rodents into the house, some which have evaded capture. We have no idea what happened to them, but presumably they’ve either escaped or been eaten or died, as the cats have lost interest in the places we suspected they were hiding. A mouse was hiding in the wall furnace and only revealed itself when B turned the heater on. A singed mouse shot through one of the vents and hid behind a bookcase. Lizzie dedicated a night to watching for it, and may very well have caught and eaten it. We haven’t heard a squeak.

Willy, handsome as ever. 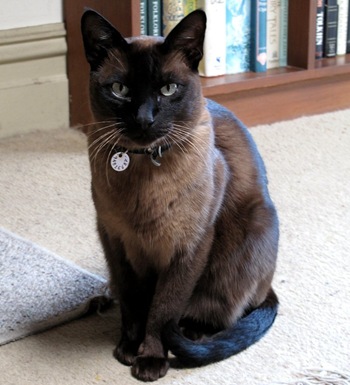 As for politics, Australia will go to the polls in a Federal election on August 21, which should be interesting, but probably is not. The media thinks it is, and is now in full election mode, since the poll was announced by Julia Gillard.

I’m hoping Julia will win. It would be a shame if she were to inherit the post of PM only to lose it shortly afterwards. She’s quite impressive, cool and collected, and more than a match for Tony Abbott and his cohorts. As long as Julia can keep her troops in order, and not be second guessed by the Opposition, and if Tony Abbott somehow makes a fool of himself (shouldn’t be too hard), Labor might scrape in with Greens preferences. Perish the thought if Abbott & Co were successful – it’d be like the Howard years all over again, only worse.

Anyway, we’ll know in a month.

that kitty will be now expecting all her fud to be lightly flame-grilled.

will you post on
DanKelly@basement.discs?
OtherRants.blogger was there and said it was excellent (of course)

Not really a cat person (allergies to cat hair or is it fur?) so more a dog house here - but your cats are gorgeous. As for the politics, fingers crossed eh?

BTW Hope this is ok, but our Friends webmaster has put a link to your Argonauts post on our page: http://www.archivefriends.org.au/index.php/forum/postlist/5/19/true (Not a lot of traffic there at present, but you never know). If it's a problem let me know.

No worries about the link. I noticed it was there after I recently got a short burst of comments on that Argonauts post, from old Argonauts.