I want one – Melbourne’s latest attraction 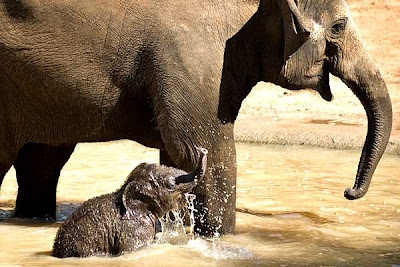 Baby elephant with mother Dokkoon - photo from The Age
Melbourne Zoo’s first ever baby elephant had her first press viewing yesterday, and enchanted the media contingent to such an extent that the Minister for the Environment was left in wings, waiting for his turn.

And of course, Melbourne is besotted, myself included, with the baby. I’d love to dash out to the zoo today for a first hand look at the little elephant, but imagine the crowd would be impossible.

The as yet unnamed elephant calf was born three weeks ago with much fanfare and celebration to Dokkoon, one of the Asian elephants adopted by Melbourne Zoo in 2005. She and two other female elephants joined the zoo’s two resident older elephants, Mek Kapah and Bong Su, in a new elephant enclosure which is a vast improvement on what Mek Kapah and Bong Su had to live in before.

Mek Kapah now has a herd to lead and has become first best friends with Dokkoon. She has also developed a relationship with the new baby.

Anyway, see for yourselves the new wonder of Melbourne and feel your heart melt.

The Age media release - another video
Posted by Anne S at 12:39 pm