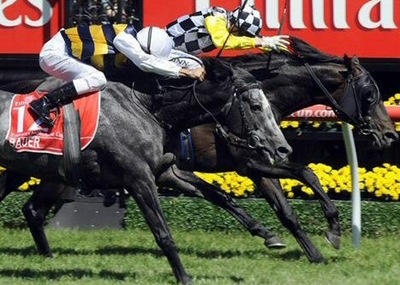 Can he do it again?

From all angles Viewed looks the one to beat. He’s in great form, is proven over the distance and is trained by the great Bart Cummings who is having a very successful Spring carnival. Of the others, Alcopop could become a fairytale hero, being trained by young cattle farmer/ trainer Jake Stephens with provincial jockey Dom Tourneur onboard. Alcopop is the son of 1994 Melbourne Cup winner Jeune, so is likely to be able to run out the 3200 metres. He, as well as Viewed, has the Foolish Pleasure Factor from his dam side. The Foolish Pleasure Factor is not to be sneezed at, as one of his descendants, Scenic Shot , took out the Mackinnon on Saturday.

Admittedly when I first saw the acceptances for the Melbourne Cup, I was astounded at how many unfamiliar (to me) runners there were – particularly the six or so International horses. As International horses have won the Cup several times in recent years, it is wise to give them respect, but judging how Kirklees and Cima De Triomphe ran in the Caulfield Cup, and Basaltico and Crime Scene ran in the Geelong Cup, they appear to be hardly a threat to the locals this year. The best of them appears to be Mourilyan and Munsef , but having not seen them in action, I have no confidence in their winning chances.

Unfortunately Efficient was scratched from the Cup, there being some doubt about his fitness as regards an old injury. Bart has two other runners besides Viewed, these being Roman Warrior who was second to Viewed in the Caulfield Cup and has excellent credentials, and Allez Wonder, a lightweight chance with female jockey Michelle Payne on board. Zavite  has claims despite his lack of form, being the son of multi winning Melbourne Cup sire Zabeel and is trained by Bart’s son Anthony.

One of my personal fancies, Daffodil, who ran fourth in the Caulfield Cup has drawn barrier 21 and will most likely be in the finish if she  gets a soft run, and the track is not too hard for her.  Rain is forecast, also gale force winds, so the one weather condition could negate the other.
Others to consider are Shocking who ran a great race on Saturday, C’este La Guerre who may surprise after a terrible run in the Caulfield Cup (he came third in the MC last year) and Warringah simply because he has Damien Oliver on his back.

Derby Day was a thriller with drama at the barrier before the start of the Mackinnon Stakes, when Zipping was trapped under the gates. Thank goodness he was pulled out safely and sustained no serious injuries, though it was enough to scratch him from the Melbourne Cup.

The Derby was won convincingly by the favourite Monaco Consul. I was disappointed that Shamoline Warrior was scratched as I’d just added him to my super stable, so we’ll never know if he would have made a difference. Still, that’s racing!

It was however delightful to see Typhoon Tracy blitz the field of the Myer Classic and win by 4 1/2 lengths. She remains unbeaten against her own sex and may race again on Emirates Stakes Day.

I have used up my final substitutions in the Spring Super Stable competition, by replacing Efficient with Viewed, and Gathering with Alcopop.

Disappointed, but not surprised about Shocking. However, the placegetters leave me scratching my head. Not pleased with the race, and can't understand the commentators saying it's one of the best ever?

I had money on Crime Scene, as a roughie, so I'll recoup a small portion of what I outlayed. Otherwise quite disappointed Viewed didn't figure at all.

The commentators always say it's the best ever, as I suppose it is every year.

Congrats on Crime Scene! Darley is on a winning roll worldwide. I won't leave their horses off my Breeders' Cup tickets, that's for sure.