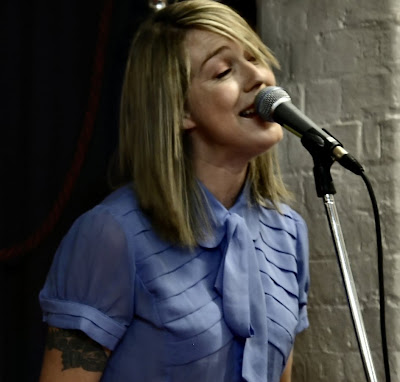 The first single off Angie Hart’s new CD Eat My Shadow, was appropriate for her in store appearance on this Friday, which is course the 13th. Angie’s new single is called “I’m Afraid of Fridays” and it’s a great little pop tune, as catchy as any that her former band, Frente! produced.

Angie was in store promoting her brand new disc which has been receiving postive reviews. Her voice shines on this Shane Nicholson produced CD. In fact I think Angie’s voice has strengthened over the years and developed depth and character.

The audience were treated to about 5 songs from the album this afternoon - a sweet taster to the whole. I wish her every success with it – it’s a winner.

Whilst on the topic of music, I should mention the delights in store for music lovers next year.

The music festivals scheduled for March and April 2010 – the East Coast Blues Festival, Port Fairy Folk Festival and Brunswick Music Festival to name a few, have started announcing participating artists, and the line up for each of them looks spectacular. No doubt there will be side shows in the capital cities of the major artists.

I’m mostly looking forward to Lyle Lovett (first time ever), Mary Gauthier (she was fantastic last time I saw her), Eilen Jewell (a new discovery this year) Old Crow Medicine Show and The Flatlanders (a first for them as well). That’s for starters. No doubt I’ll be tempted again when further announcements are forthcoming.